This page describes how to integrate MongoDB with Django with focus on Djongo. It describes the Django ORM internal implementation that is not covered by the Django documentation. If you have not yet checked out the introduction to Djongo, be sure to do so first!

The Django ORM can be broadly thought of as multiple Abstraction Layers stacked on top of each other. 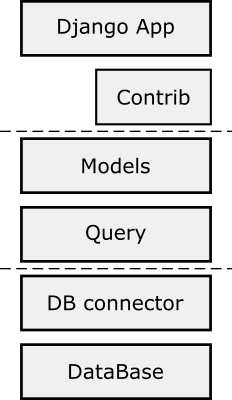 Your Django App and Contrib packages interface with the Models API to implement their functionality.

The Database only accepts SQL query string specific to its type.

Ways to integrate Django with MongoDB

From ORM to ODM

Object Document Mapping (ODM) is the Object Relational Mapping (ORM) for non-relational document oriented databases (like MongoDB). In an ODM, python objects (or group of them) are stored as documents instead of tables. Implementing an ODM for Django would entail rewriting several Django modules.

Django-nonrel aims to integrate Django and MongoDB but is not up to date with the latest version of Django.

A different approach is to translate Django SQL query syntax into pymongo commands. 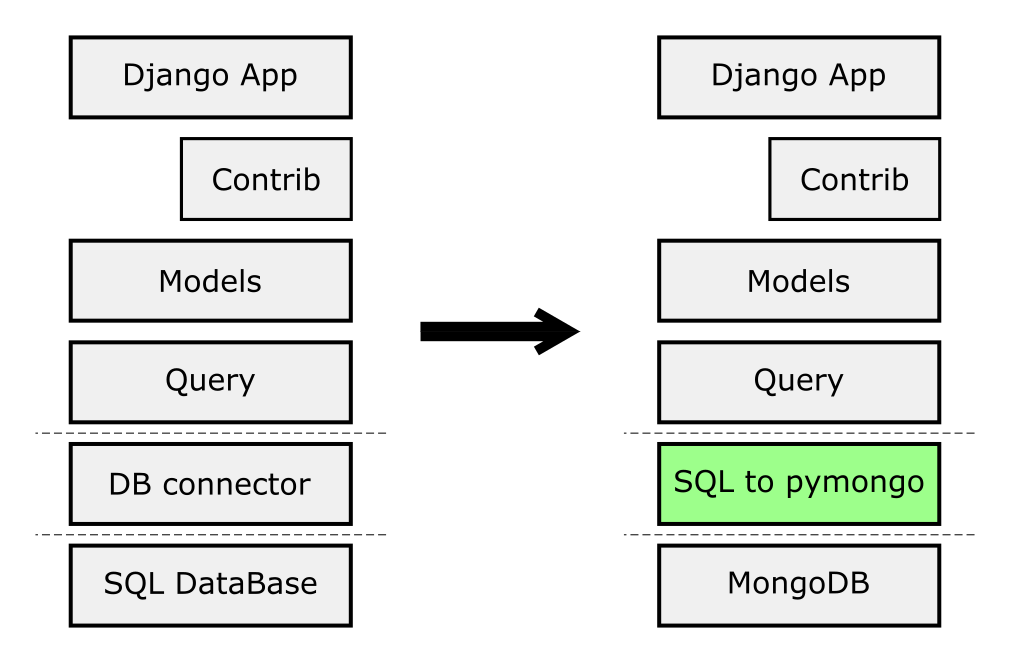 This has several advantages

Django is a stable framework with continuous development and enhancements. The Django ORM is quite extensive and feature rich. Defining a third party ORM to work with MongoDB means reproducing the entire Django ORM again. The new ORM needs to constantly align with the Django ORM. Several Django features will never make it into the third party ORM. The idea behind Djongo is to reuse existing Django ORM features by finally translating SQL queries to MongoDB syntax.

As SQL syntax will never change regardless of future additions to Django, by using Djongo your code is now future proof!

MongoDB is a schema free DB. You no longer need to run manage.py migrate every time you change a model. Making changes to your models is easier.

Work on the Real Django

Djongo does not make you use a forked version of Django, access MongoDB with the Real Django framework.

More details on implementing Django MongoDB connector can be found in the design document.